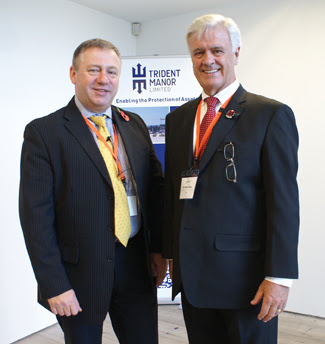 How to secure museums – and the artworks and antiquities that are in them, or on their way to them from other museums, or held by dealers and collectors – was the subject of a gathering of the International Arts and Antiquities Security Forum (IAASF), in Gateshead. Pictured at the Baltic Centre for Contemporary Art on the banks of the River Tyne are IAASF and event chairman Andy Davis; and one of the morning speakers, Jim McGuffey, cultural properties council – lead on protecting places of worship for the international security management association ASIS.

While museums were well represented – speakers included Michael Huijser, director of the Dutch National Maritime Museum in Amsterdam; and Declan Garrett, security and safety manager of the National Gallery Ireland in Dublin – as speakers pointed out, art and antiquities are also held by churches; in corporate head offices; and universities; and as investments. Julian Radcliffe, chairman of the Art Loss Register, described how the register – offering checks on the provenance of artefacts – covered not only the obvious paintings and sculptures, but watches, coins, medals, and rugs. The register – or rather, checks by auction houses and private buyers – can prevent stolen items from entering the reputable market; the register has even reunited an institution with an object that was stolen from it in the year 1680, Radcliffe said.

As Michael Huijser and other speakers pointed out, museums are highly popular, drawing in tourists, and bringing visitors closer to the exhibits; but that very popularity of valuable objects (such as jade; rhino horns to a market in China and Vietnam; or porcelain) brings risks. Andy Davis spoke of the need for ‘a holistic approach’; and for medieval castle-like, multi-layered defences.

After lunch one of the exhibitors,FogBandit, took a side room to exhibit its security fogging device. Simon Wilson of the firm demonstrated how the device can fill a room to make it impossible for intruders to find their way out; the product is typically in use in jewellery shops; and in bullion centres.

To show how the security of artefacts takes in more than crime prevention, a final panel of the day included Andy Davis (of the consultancy Trident Manor); Annabel Fell-Clark, former chief executive of the art insurers Axa Art, now a consultant; William Brown, the national security adviser for Arts Council England, who also spoke on the secure and safe transport of art works, typically on loans internationally, including as part of ‘cultural diplomacy’; and Dr Nicholas Eastaugh, founder of Art Analysis and Research, which offers due diligence on works of art – that is, to check that they are what the buyer says that they are. The day closed with a drinks reception at the gallery.

Andy Davis told Professional Security that he has been pleased by the response to the event, outside London: “Today it’s achieved what I wanted it to achieve.”

More in the January 2017 print issue of Professional Security magazine.